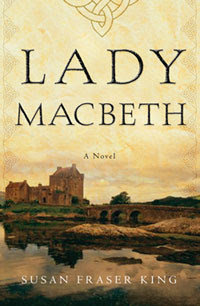 I’d had my eye on this book for quite some time, and now I finally purchased it. I was going to save it for later (seemed ideal for those lovely, dark, stormy autumn nights) but then I just could not resist.

Not that the Finnish summer so far much differs from those cold autumn nights, with the temperatures at "+7 degrees C, feels like +3" and hail storms several times a day. I wore my winter boots and winter coat when I ventured out of the house, yet somehow managed to pick up a cold somewhere. 😔(And now it's nice and warm outside. Of course.)

But now, back to the book! I couldn't wait to start it, because, well, it’s Macbeth… even better; it’s Lady Macbeth! It’s Scotland. It’s the 11th century. (There are Vikings, too.) I have previously read another novel about Lady Macbeth, titled “Lady Macbeth’s Tale”. You can read my review here.

I must point out that the castle on the cover of the novel looks a lot like Eilean Donan castle near Inverness, a castle I visited on a holiday with my husband over ten years ago now. I really want to go back to Scotland! 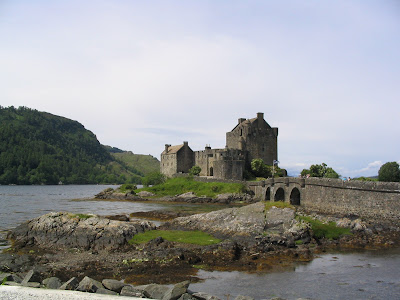 But that doesn't seem likely, so I'll take the next best thing: books.

Macbeth is famous thanks to the tragedy by Shakespeare, but what the bard did was he used the actual events for inspiration without bothering much with historical accuracy. It does make a great story, but in it, Lady Macbeth appears as an ambitious, ruthless woman who drives her husband to commit regicide in order to seize the crown.

Was she really like that? Unfortunately, we will never know, but Susan Fraser King has put together an account of Lady Macbeth’s life from what precious little is known about her and her (in)famous husband. Recent research has revealed some new information (again, I very much enjoyed the Author’s Note at the end of the book, always interesting), yet much remains unknown. But that is historical fiction: taking some few facts, using fiction to bridge the gaps and weave a plausible and – at its best – spellbinding story.

Lady Gruadh is of royal blood, which makes her a coveted prize among men vying for the throne of Scotland. Though she is kidnapped as a child, later married off against her wishes; though her husband is slain and his ambitious killer promptly marries her to strengthen his claim to the throne, she maintains her own will, at least as far as possible in her circumstances.

Thanks to the old Celtic tradition of women wielding weapons, Gruadh is allowed to train with a sword and even fight battles. She is not the ambitious schemer Shakespeare portrays but a much more complicated character with conflicting motives. Her strength is not only in her will and ability to protect those she loves, her people and her land and its ancient customs; it is in how she endures and survives the hardships and tragedy that life has in store for her.

The story spans decades and blends historical fact with a bit of Celtic myths and magic. The feel of the period is real, the details meticulous. The book took me to the mist-shrouded highlands and the halls of ancient kings, and I thoroughly enjoyed the journey. The language was beautiful, although it seemed to weaken a little after a stunning start.

My only complaint is that I did not really feel connected to the characters; they remained a little distant - Macbeth, who could have been a truly intriguing character, especially so.

All in all, this was a fascinating read which made me want to know more about Macbeth, Lady Gruadh and their time.
Posted by Ulla Susimetsa at 15:01 No comments: