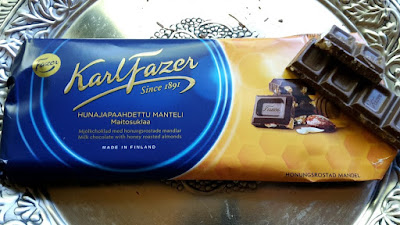 The wrapping is the typical, classic blue of the Fazer milk chocolates, with a picture of (rather deliciously looking) roasted almonds and pieces of chocolate.

The scent has the sweetness of milk chocolate with the equally sweet, warm undertones of honey.

The milk chocolate itself is of the Fazer quality – my favourite milk chocolate in fact, smooth, not too sweet or sugary (they use fresh milk rather than dried or condensed milk). The honey roasted almonds come in fairly large fragments, crispy and crunchy and not too hard. There is the sunny sweetness of honey and the lovely toasted aroma of roasted almonds. I also detect a hint of salt – salt is mentioned among the ingredients but not among of the flavourings on the front of the wrapping... but I’ve seen this chocolate marketed as “with a touch of salt”. Either way, I like that bit of saltiness and might even have wished it to be more pronounced.

So far, my favourite among flavoured milk chocolates from Fazer has been the sea salt and caramel, but, while I still adore the flavour, my teeth are not too happy with the hard caramel granules. This might be a good alternative; gentler for your teeth and absolutely delicious!
Posted by Ulla Susimetsa at 14:33 2 comments:

Review: A Song of War: A Novel of Troy 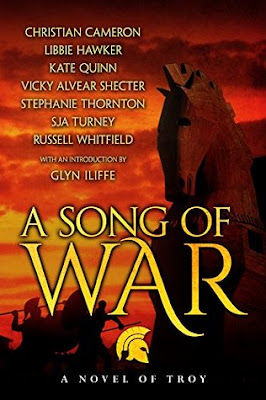 I recently reviewed “A Day of Fire: A Novel of Pompeii” and some time before that “A Year of Ravens: A Novel of Boudica’s Rebellion”. Both are similar to “A Song of War: A Novel of Troy” by Kate Quinn, Christian Cameron, Libbie Hawker, Vicky Alvear Shecter, Russell Whitfield, Stephanie Thornton and S.J.A. Turney in that all are novels written by several authors.

Each author writes their story from one or two point of views, which means that these change in the course of the book. But it works very well, here perhaps even more seamlessly than in the other two previous novels, or maybe it’s just that I’ve gotten used to this method.

We see the Trojan war and the events that led to it through the eyes of several characters, both Trojan and Achaean; kings, princesses, slaves, warriors… The situation lends itself to delicious drama and conflict. There are battles, there is betrayal, there is love; some seek honour, some vengeance, some victory... One of the central themes is honour and hubris, and the utter senselessness of war. The characters sacrifice so much, or even everything, but what do they win?

It would be hard to choose a favourite among these stories, so I’ll just say a few words about each.

Kate Quinn: The Apple. The story that begins the novel is told by Hellenus, half-brother of Hector and Paris, and Andromache, Hector’s young wife. Both suffer from feelings of not quite fitting in, which makes them endearing characters. Their tale of the wedding of Odysseus and Penelope introduces us to many of the key characters. The beginning may not be as dramatic as the later parts, but Quinn is an experienced author and that shows; the story gripped me right from the start. I loved the humour and I really cared about Andromache and Hellenus.

Stephanie Thornton: The Prophesy. This part is told by Priam’s daughter, Cassandra. As she is often known as a mad prophet, it was clear that this part must have been a challenge to write. On one hand, it is a truly fascinating perspective, dark and intense, but on the other hand, you don’t want the character to appear so insane as to alienate readers. Stephanie Thornton handles this with enviable skill: you don’t only understand Cassandra, but her descent to madness is so real and relatable it’s almost scary.

Russell Whitfield: The Sacrifice. This part is told from the perspective of Agamemnon, a king weary of the war and the world, tormented by his guilt and his grief. It is gritty and tragic, and if, by the end, I did not quite like or admire Agamemnon, I certainly pitied him.

Christian Cameron: The Duel. Once a queen, now a slave, Briseis finds herself becoming the lover of the legendary Achilles – and taking the place of his chariot driver. I couldn’t quite get into this story at first, but when I did… what a ride! The story gains momentum as it hurtles towards its poignant, tragic end.

Libbie Hawker: The Bow. This part has two narrators: Penthesilea, a fierce amazon, determined to seek honour and death, and Philoctetes, an old, crippled warrior, hopelessly in love with Achilles. I fell in love with both. Add to that the lovely language, the haunting and beautiful imagery… I wanted more! I have actually read one novel by Libbie Hawker before, but this story definitely convinced me to check out her other work.

Vicky Alvear Shecter: The Horse. This part has one of the most well-known narrators in the collection: Odysseus. There’s quite a lot of humour in this account of the wily trickster, but underneath it runs desperation. The war is dragging on. Someone should do something. Which is more valiant, fighting on (and on and on) or using any means to end the conflict?

S.J.A. Turney: The Fall. The end is seen through the eyes of Aeneas, which is fitting in many ways. Even when Troy falls, all the threads of the narrative are woven together. There is tragedy and so much sorrow, yet there is also hope of a new beginning.

All in all, I enjoyed “A Song of War” immensely. The story is literally legendary and very familiar – from other books, movies, TV shows… but even though I knew what would eventually happen, I never really wanted to put the book down.
Posted by Ulla Susimetsa at 16:07 No comments: 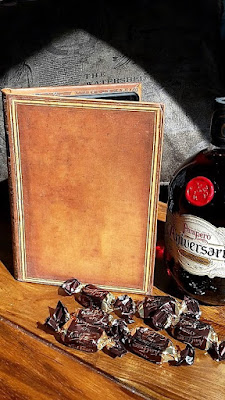 I haven’t posted in a while, mostly because I’ve been busy translating, revising our manuscript, reading source books and – very unusual for a hermit such as myself – meeting other people! In addition to family members, we even got together with some very dear friends who live far away. It had been a long time since we last saw each other, and the reason I'm telling you all this is that we were actually brought together by books. See, books are amazing! So are friends. 😊

But now I wanted to show you my new e-reader (Kindle paperwhite) cover. Isn’t it beautiful? 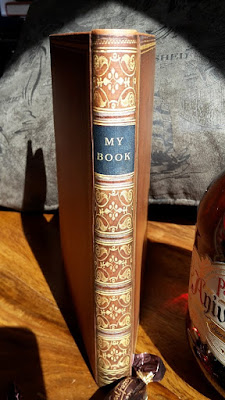 When I first saw it, I knew right away that this was the one! It comes from this company here, and the note included said that it has been hand crafted using traditional book binding techniques. 😍 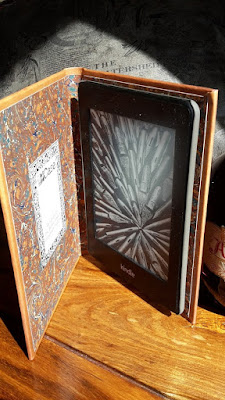 Since I’ve been carrying my Kindle along with me simply in my bag or, on longer trips, in a small fabric pouch, I’m happy to have this case to protect my precious. Only, I like the cover so much that I think I should now protect it, too... 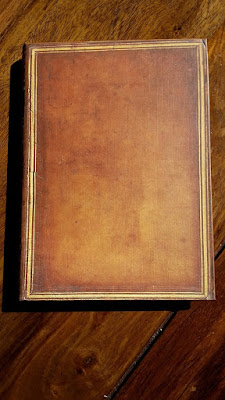