If everything goes as planned, and I truly hope it will, this should be my last post from isolation. It’ll be two weeks since my first vaccine dose this weekend, so I have been cleaning my rented room and gathering my things. (I have sent away all coffee except what I need tomorrow morning, so this had better work out!) Tomorrow my family may be in for a shock when a cave woman will appear in our apartment. 😜

39 days is rather a lot more than the three hours I predicted I might last without my family. But what were these 39 days like?

Not very exciting, as I may have mentioned before (and again).

I missed my family, and that made it extremely hard, but otherwise, I did not suffer from isolation. Finally there are some perks in being an introverted hermit! As long as I have books to read and stories to write, I’m fine. True, sometimes it would be nice to go to places, like the library or museums (and the biggest nerd award goes to me! 😄), but the longer the pandemic has lasted, the less I seem to miss those things. Probably just adapting to the circumstances.

And being on one’s own is not always a bad thing. Something I’ve been thinking about a lot lately, in connection with a story I’ve been playing around with, is how the perceptions of others (or their perceived perceptions) influence how we see ourselves. When people say things like ”You’re such-and-such a person” or ”You always…” - how do those interpretations and narratives affect the way we behave and the way we feel about ourselves? How do they influence our actions and, therefore, even our future? When you spend time on your own, you’re not surrounded by these interpretations. Can you be more yourself then, perhaps even rediscover or regain some part of yourself that you may have put aside, ignored or toned down while you’re around other people? When you’re on your own, you can’t rely on others for, say, emotional support. Perhaps there are traits that take over only when you’re alone because you don’t need them at other times.

I’m not going to share any big revelations concerning such things. Something that has become clear during these days: I am not prepared to discuss anything truly personal publicly. More drama and personal disclosures would, no doubt, make for more interesting reading, but that is not me – and I suppose you’d need to have that drama in your life before you can go and talk about it 😄 or at least have a talent for developing/embellishing it.

Something else I’ve learned during these weeks, though: I am the kind of person who’ll hand wash dishes rather than try and use an unfamiliar dishwasher. Considering the pizza debacle, that may be a good thing.

It would also appear I’m one of those people for whom unseen or implied threats are more frightening than things they can actually see. Not that I was scared here at night… much... but I did not bring a sword with me! Now, the sleeping alcoves have curtains, which seemed like a good idea, to close off the sleeping space and to shut off the light from the window. But no! Something might be lurking behind the curtains and I had to leave them open. Then again, when there was too much noise at night, I started closing the curtains, hoping they’d absorb sound. Apparently my fear of sleep-disturbing noise outweighs my fear of creatures of the dark.

Having mentioned swords, I’m seizing this excuse opportunity to post photos of mine (mostly because I have no relevant picture for today’s post). Click, and bigger pictures shall appear:

During this time, I wrote a blog post every day. Not an experiment I’m keen to repeat. Also, it seems that when I have nothing else to say, I start talking about food. Or embarrassing examples of serious bookgeekery. Or just books.

Oddly enough, the aforementioned pizza (mis)adventure ranks among the most popular of my isolation posts! Readers were equally interested in the one about books and libraries, though, and the one with my DD’s lovely snow owl. 💗

Last, but certainly not least, I want to say thank you to dear friends who have cheered me up, sent (and read) messages and generally been there for me. It has helped enormously, and I am truly lucky to know you. 💙

Posted by Ulla Susimetsa at 15:24 No comments:

A third night with not nearly enough sleep. Still, I spent the morning cleaning and organising and even made a phone call to reschedule a medical appointment (a big deal for an introvert – I loathe making phone calls). After lunch, I worked on a translation project while also doing some meal planning for the weekend and next week, putting things in the shopping cart in our online grocery store (sounds good when I put it that way, but in reality I pick items that should keep, and when I’m about to cook, go ”hmmm, what do we have? What can I make of these? And what am I in the mood for?”). Now I am feeling accomplished enough to call it a day and grab a book. 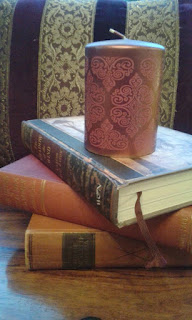 Posted by Ulla Susimetsa at 16:22 No comments: 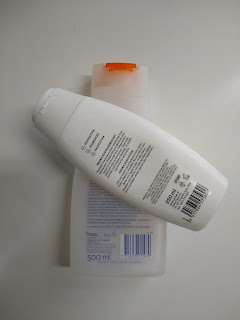 This is one of the downsides of living alone. I want to recycle these plastic containers for soap and moisturiser, but to put them in the recycling bin, I need to get the caps off first so that I can rinse them. And I just can’t do that. My autoimmune disease causes inflammation of the joints, and my hands have been rather bad lately. I can give them to my DH to deal with - the containers, not my hands (though that would be... wait for it... handy 😜) - but what if I didn’t have that option? I suppose I could always try and saw the containers in half with a knife or scissors – but when your hands are swollen and hurting and clumsy, that might not be the best idea.

Posted by Ulla Susimetsa at 16:01 No comments:

I slept poorly last night (bad dreams, too much noise), and have felt rather miserable today. It’s not just lack of sleep but also health concerns combined with other worries and uncertainties – and the pandemic situation isn’t actually helping.

It is one of those days where I compose a message in my head, then keep waiting for a response even though I haven’t yet actually written, not to mention sent, my message. Or where I pour half the coffee next to the mug, then wonder why is the coffee gone. 😑

Another warm, sunny Sunday! The best part was that I got to spend time with my family. We sat outdoors, talked, had some chocolate and cookies. Lovely! And there were some buds in the lilac tree. I do love that tree – we’re no gardeners, so our garden is more on the… let’s say bohemian side 😄 but the lilac tree was there when we moved into our apartment and has somehow survived the years with us. The scent of those blooms is one of my favourite scents. 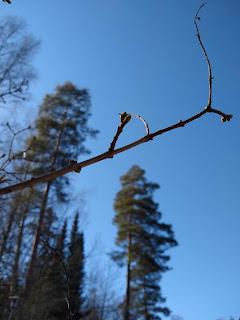 Posted by Ulla Susimetsa at 17:06 No comments:

Today’s lunch, which I made, my DH picked up, and we all ate together while having a video chat, was these wraps. 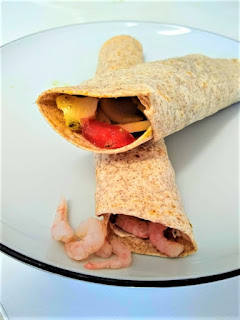 I made some with a pesto, cheese and tomato filling and some with cucumber, blue cheese flavoured cream cheese and turkey slice filling for DH and DD, and cucumber, same cheese and shrimp for me. When I packed them for my family, I put in little notes where I’d written the fillings (using the first letters of the Finnish words):

which, if you write it

which, if you write it

Tuo leikkur (the last word is dialect/spoken language though) means either ”Bring the cutter” or ”That cutter”.

I suppose I could (should?) claim that the isolation is finally getting to me, but I’m afraid this is something I would do anyway. 😄

Posted by Ulla Susimetsa at 14:45 No comments:

Yesterday’s post was short, and once again, I seem to have nothing to say. That’s natural, I suppose – when you’re in isolation, nothing much happens. Which isn’t always a bad thing.

However, I did realise that (a long, long time ago) I’ve posted about some of my Lego minifigures (here and here) but I haven’t shown you my latest creations: 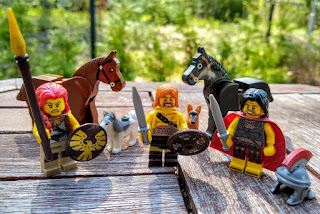 When you love certain books so much you want to portray some of the characters as Lego figures. 😄 From Manda Scott's Boudica series Breaca, Caradoc and, of course, Valerius.

And above is a portrait of some of my favourite fictional heroes: Aragorn (both Strider and King – no introduction necessary, I believe), Valerius (also in the first picture), Eirik Väkevä (Eirik the Strong from Kaari Utrio’s Vaskilintu) and last but not least, Josef Svärd from Kuninkaan rakuunat (King’s Dragoons series). 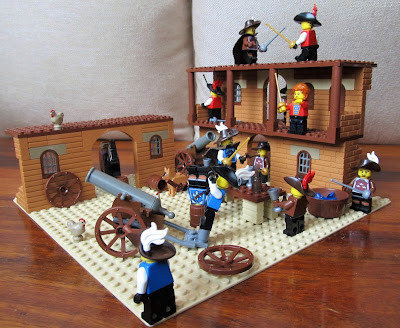 This was a bigger project for the entire family – a mayhem at an inn, a fight between the King’s Musketeers, the Cardinal’s men and the King’s Dragoons.

Posted by Ulla Susimetsa at 14:32 No comments: